There’s only one F in Fulham

THESE GUYS ARE Our voice!

They used to be called Back To The Cottage

The Fulham Supporters' Trust began life as the Back to the Cottage campaign, formed after Fulham Football Club announced it had dropped plans to develop Craven Cottage on the lines of the planning permission received in February 2001.

What began as a group of like-minded fans distributing leaflets and engaging the media to seek answers to a number of pertinent questions, soon developed into organisation campaigning under the Back to the Cottage banner.

Following a well attended meeting at Hammersmith Town Hall, fans decided to establish a Supporters’ Trust, following the successful model in place at more than 100 clubs across England, Scotland and Wales.

A series of meetings with local authority representatives, politicians and advice from planners, architects and business people helped the Trust put up a convincing case that, counter to the club's position, a return to Craven Cottage was not only viable, but the only way to secure Fulham's future.

The campaign was helped by generous donations from Fulham fans and support from former Fulham players and coaches as well as the wider footballing community.

The club announced on 3 September 2003 that they would return to Craven Cottage - and Fulham played their first competitive game back at their historic home against Bolton in August 2004.

Since our return to the Cottage, the Trust has continued to have a dialogue with the club, holding regular meetings with club officials.

The Trust is wholly independent of Fulham FC and was set up with the assistance of Supporters Direct, a government-funded initiative who aim to help fans “who wish to play a reasonable part in the life of the football club they support.”

The Trust have always been committed to helping to secure the long term future of the club and have focused largely on governance, supporter relations, ground development and the club's financial position.

The Trust seek progress and success like every Fulham fan and remain extremely appreciative of our chairman. We are committed to working with Fulham FC, the local community, local authority and all other relevant stakeholders to ensure the long term viability of the club.

The Trust would like to consult on the following draft objectives which have been ratified by the Committee:

To publicise the Trust through the local and national media

To continue to forge strong links with Fulham Football Club, the local authority and local decision makers, political figures and national supporters' bodies (such as Supporters' Direct and the Football Supporters' Federation) and take part in the appropriate campaigns for organisation.

We would like to encourage all Fulham members, whether they are currently members of the Trust or not, to contribute their ideas and thoughts as we shape our campaigns for the forthcoming season. Fulham fans are invited to do this either by emailing the Trust directly on info@fulhamsupporterstrust.com or using the form located in the 'Contact Us' section of the FST website.

I found this old article on the getwestlondon site and as it’s relevant to the formation of BTTC and subsequently the FST, I thought it worthy of inclusion here rather than on the media page.

As the millions flow out of the Fulham bank account this season on stars from across Europe, it is very hard to believe that a mere quarter of a century ago the club was on the edge of oblivion.

It is even harder to imagine those far off bleak, hungry, days that the fate of London’s oldest clubs was influenced by a small, yet determined, band of volunteers. There’s a lot of rot these days talked about “loyalty” to a club.

Many so called supporters measure loyalty by the amount of online abuse you can throw at opposing supporters and their clubs; in my view, a measure of loyalty is how much money and time you are prepared to put where your mouth is when your club in in peril.

It was 1992, Craven Cottage had been sold off for housing development – after all it is valuable prime land by the Thames – and the bulldozers were ready to move in. The club didn’t have two pennies to rub together, the team was struggling in what is now League One and crowds were down to just over 3,000. As one of my colleagues, a third generation Fulham supporter, said sardonically there was as much space for an open, passing, game on the terraces than on the pitch.

The rescue crew was called Fulham 2000 – in the vague hope that the club would still be around at the end of the century. Around 30 of us used to meet at the ground after games and on frosty Sunday mornings to work out how we were going to raise millions to save the club; a forlorn hope at the time. For a start, we all pledged 100 pounds each and I even persuaded my dad – a Kidderminster Harriers supporter – to follow suit.

I was working at the BBC then, so I was elected press officer - a small role in a coalition of the hopeful. I remember getting a pat on the back all round for getting an interview with lifelong Fulham fan Melvin Tenner, our leader at Fulham 2000, on BBC News. But it wasn’t looking good in those dark days in a season when we lost 2-0 at home to Hayes in the FA Cup. You could feel the interest melting away faster than the crowds. Business didn’t want to know, the talk was of a ground sharing with Chelsea, there was a conspiracy theory that the management wanted to run the club down to the Conference and then close it down quietly. I didn’t believe the latter, but one or two times, on rain swept terraces when we were losing away from home, I wondered.

You know how deeply in the mire you stand when you are shaking a bucket in the faces of supporters of an even more impoverished team in the relegation zone fresh from a journey of hundreds of miles from the north that probably cost half their wages.

That is what we happy few of Fulham 2000 were doing on January 28 1992. We had chosen the Wigan game at home for the launch of our fund-raising drive, probably not the most glamourous fixture, but arguably the Lancashire club was a kindred spirit when it came to struggling in the lower reaches of English football. On that day, they were deep in the relegation zone long before the millions that took the club to the Premier League. Even so, the Wigan fans tossed generously 50 pence pieces into our buckets.

“Good luck and hopefully we will still be playing you next season,” they said cheerfully. I often think of that day when I see some of the spoilt, repugnant, moronic, abuse that is thrown around on the internet these days. As a football fan, I was happy when Wigan escaped relegation that season. Earlier in the day, Fulham 2000 had announced itself to the world in a Hammersmith hotel where we had arranged for the late Fulham legend Johnny Haynes to come down from Edinburgh to launch our campaign to save the club.

To make matters worse, George Best, another Fulham great, turned up late in the middle of his opening address.

The Fleet Street journalists forgot Johnny was speaking and swamped Bestie for a few choice quotes. I can still see Johnny droning through his speech with one eye on the impromptu Best press conference. It was, as they say on line these days, cringe worthy.

Anyway, we all pitched up for the last home game of the season against Bradford City in the understanding that it was going to be the last ever at the Cottage. The first shock was we won; the second shock was it was announced over the tannoy that a stay of execution for at least another season had been secured. More than five years later, the banks, who wanted to get the Craven Cottage asset off their books, sold the club to Mohammed Al Fayed and the rest is history.

It was all worth it on that wet April day in 1997 I flew from Africa to Heathrow and drove up to Carlisle for the crunch promotion game. There was about 2,000 of us at Brunton Park – Terry Angus, the injured centre half, was leading the singing in the stands! (Can you imagine David Luiz doing that?).

Two goals to one: Micky Conroy equalised and I was dead in line when Rodney McAree smashed in the second. It was like Christmas; total strangers were hugging and shaking hands. It was worth every yard of my 7,000-mile journey.

Thirteen years on, I almost wept when I watched Fulham walk out for the Europa Cup final in Hamburg. As fate would have it, I was on assignment in Nairobi and rued how I could make it to Carlisle for a League Two game, but not to Germany for a European final.

Watching it TV on a hot Kenyan night, I mused that cold meetings in Craven Cottage 18 years before had been worth it. To think it could all have been lost in the path of a bulldozer.

The Trust's monthly meeting with the Club in June was  moved, at our request, from Monday 8 June to Wednesday 10 June. This is because the EFL board and clubs were due to meet to finalise and vote on arrangements for how the 2019/20 season will be concluded.

Obviously, the Championship will continue to a finish between 20 June and the start of August, with matches played at home and away venues behind closed doors. However, we thought it would make the meeting more useful and productive to hold it after those arrangements had been finalised.

While it is anticipated that most of the discussion will be on the re-start, building on the previous two meetings, if there are other issues you would like us to raise on your behalf then please let us know by email.

This link will take you to the Cub Meetings page 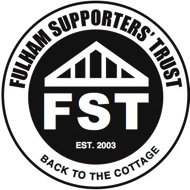